“TANJA” – is back on the road with “Spaces of Sanctuary” Exhibition 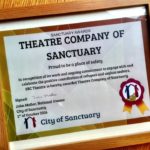 Sanctuary in Arts awarded Stand and Be Counted (SBC) Theatre  Company has  secured funding from ACE for some work alongside a new tour of ‘TANJA’ in November. The show will be accompanied by a full engagement package including Celebrating Sanctuary events, schools workshops and  a photography exhibition by Joanna Vestey, ‘Spaces of Sanctuary,’ only ever seen before at Glastonbury Festival and the Southbank Centre.

At least ten free tickets will be available to City of Sanctuary groups and we encourage our supporters to engage with this opportunity. 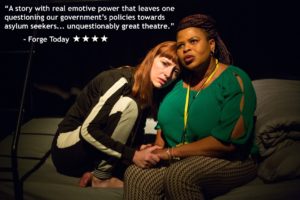 The play:  An impassioned call to arms, a play and a campaign: ‘TANJA,’  from SBC Theatre,
is a dramatic exploration of immigration detention centres starring Emily Ntshangase-Wood,  a former Yarl’s Wood detainee.
Central to this play are the lived experiences of asylum seekers and refugees across the world. ‘TANJA’ (the pseudonym used in the British press in reference to asylum seekers speaking out against abuses within the system) takes audiences inside an immigration detention centre whilst examining and challenging the UK’s position in the ‘Refugee Crisis.’

Further information, links to the trailer and other images, reviews and partner feedback from the first tour of the play please download TANJA-Marketing-and-Audience-Development